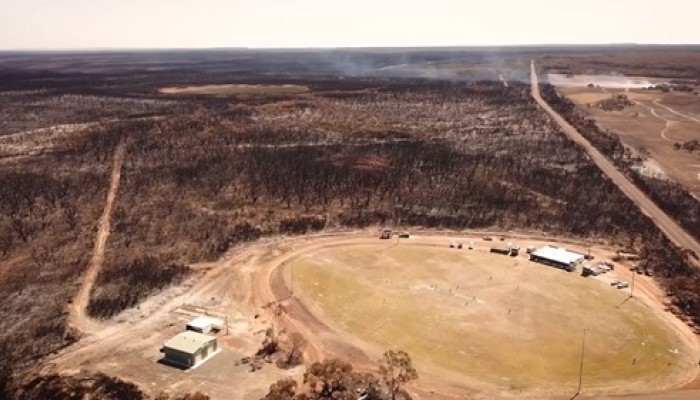 Modular rebuild on the way for Kangaroo Island sporting community

The South Australian Government has partnered with Cricket Australia and the AFL to help the Western Districts Community Sports Club on Kangaroo Island rebuild following the devastating bushfires earlier in the year.

In a three-way funding agreement, the club will receive a total of $1 million to install a new Ausco modular facility to replace the clubrooms that were destroyed by the ferocious Ravine fire in January.

Modular builds are quick and simple to install meaning the club will be able to focus on investing its insurance money in a new community facility.

The new facility will include unisex compliant changerooms and amenities for players, a separate changeroom for umpires, a large social room for community events, a kitchen/kiosk with a bar facility, storage space and public amenities.

South Australian Minister for Recreation, Sport and Racing Corey Wingard said it’s great to be able to work with Cricket Australia, SACA, the Australian Cricketers Association and the AFL/ South Australian National Football League (SANFL) to help with the recovery process advising “we’ve seen incredible resilience on the island in recent months but we know there’s still a long road ahead.

“I have special memories of the Western Districts Community Sports Club, having played footy there as a kid, and I was devastated to see the damage caused there in January.

“A modular build is the perfect solution. The club will be able to reopen quickly while also planning for a bigger and better facility than the one they lost.

“Both Cricket Australia and the AFL have done an outstanding job fundraising to help those who’ve suffered as a result of the bushfires and it’s a pleasure to be partnering with them to help Western Districts out.”

The AFL has also committed additional funding for a range of other works including upgrades to all ovals on Kangaroo Island that support football.

AFL Community Relief Fund Governance Committee Chairman Lindsay Tanner said the League was proud to partner with Cricket and the South Australian Government to deliver a modern facility for the Western Districts community.

Tanner added “we commend the partnership approach to this integral aspect of the recovery on Kangaroo Island and thank Cricket and the South Australian Government for their collaboration.

“To all the football clubs and leagues in bushfire affected areas, we are committed to continuing to work with you through the rebuild and recovery stage in this difficult time. The AFL CRF Governance Committee will meet again in May to evaluate further applications for funding.”

SANFL Chief Executive Jake Parkinson said ensuring the people of Kangaroo Island had the opportunity to be involved in football, and sport in general, was vital as they recover from January’s devastating bushfires.

Parkinson highlighted that “sport is the lifeblood of regional communities, so this facility will ensure Kangaroo Islanders maintain their sense of purpose while continuing to have an opportunity to bond and remain active.

“We’re hopeful to have the build completed later this year due the innovative Ausco modular design.”

Ausco Modular and SANFL were awarded the 2019 SA/NT Community Facility of the Year award for the Blyth-Snowtown Football and Netball Club (BSFNC) facility upgrade at the 2019 Parks and Leisure Australia Awards of Excellence presentation in Adelaide.

The project was the first high-specification modular sports facility in South Australia and kicked off a national roll out of building projects to accommodate the rapid growth in female football.

Ausco Modular collaborates with peak sporting bodies such as the AFL and their state leagues to provide unisex changeroom facilities that meet the needs of the community from a design, quality, cost and project delivery perspective, that will enable the health and growth of the grass roots sport.

The building, constructed at Ausco’s Edinburgh manufacturing facility in Adelaide and installed on-site over a two-day period, was funded by the South Australian State Government, the Wakefield Regional Council and a range of community sporting groups.